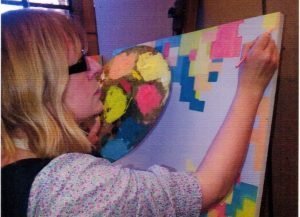 2003/4 Artist in Residence at Worcester Cathedral

2006 –2008 Lead Artist for a project team working with the Trust and the Kings Fund on a specific arts project to enhance the healing environment at Ward D2 Kidderminster General Hospital.

2000 – Undergraduate BA Hons Fine Art and Design, University of Worcester while continuing to develop my own business/practice.

2002 –  Artists Teaching Programme with Worcester College of Technology in partnership with Worcester Arts Workshop. Included Facilitating, The Psychology of Learning, Teaching Strategies, Producing Resources, National Curriculum and Key Stage Structure. This required a variety of teaching practice both assisting with and facilitating the artistic content of specific schools based residencies.

2003 – Graduated with First Class Honours and continued to work as a Freelance Artist and Workshop Facilitator working with most age ranges from four to eighty including moderate and severe special needs, disabled and disaffected groups.

2003/2004 – Artist In Residence at Worcester Cathedral in Partnership with The University of Worcester.

2014 Beneath the Surface, The Museum of Royal Worcester, Worcester UK

January 2021 to current date – Due to Covid Online Workshops only.